Dr. Cherie Buisson and the story of Nikki

When I woke up the morning of January 6, 2011, I had no idea that my life was about to change.....again.  There had been alot of changes in my life recently.  I had left my full-time job at SPCA Tampa Bay less than a month before to open my own business.  I was exhilarated and terrified to be self-employed for the first time.  The holidays were over, and I was trying to get back into the swing of things.  I was still working at SPCA three days a week as their relief veterinarian until they could find someone to replace me, but that day, I was doing relief work at another local shelter.  I was available by phone for the medical team at SPCA, so I assumed they simply had a question for me about a patient.  Instead, the tech sounded excited and upset.  There was a puppy that had come in with their 24-hour ambulance service.  Was there any way I could come in and tend to this puppy's mutilated ears?

I quickly made arrangements to leave the shelter early so I could get over to SPCA.  They had already administered pain medication to the puppy and would keep her as comfortable as possible until I arrived.  When I reached the shelter, the clinic was full of people.  One of the assistants disappeared into the kennel and returned with a wretched-looking puppy in her arms.  In her eyes, I saw the definition of "suffering".  She was dull-eyed and squinting, brow drawn with pain.  What was left of her ears were two rotten, dangling masses of flesh with large indentations where the rubber bands had been deliberately placed to inexpensively crop her ears.  I could smell the infection from across the room.  I examined her quickly, but I had to be thorough and document everything I saw for the animal cruelty case that was sure to come.  Every second I was keenly aware that this little baby was suffering.  Pain medication can only do so much in the face of such injury and rampant infection.

Once we had her under anesthesia, you could hear a sigh of relief from every person.  My heart rate began to drop, and I took deep breaths to release the tension.  I knew her ears had to come off.  I had seen injuries like this before.  About a year earlier, a young pup with gaping wounds where her ears had been came through our doors.  She had been healing, so surgery wasn't necessary.  I had never amputated ears before, and I was anxiously running the procedure through my mind as I gave instructions to the staff.  It didn't help that I had an audience armed with camera and video to document the entire surgery.  But these were all friends - of me, and of the little girl with the sad, sad ears.  Everyone was there because they were so worried about her.

We cleaned the surgical site as much as possible.  I removed the rubber bands, which were astonishingly small AND twisted double around each ear.  The bands were photographed with a ruler to show their size.  Up close, the ears were even worse than they had appeared.  There was very little normal tissue to be salvaged.  I just hoped there would be enough to close her wounds.

I went to work.  My only rules were that the spectators keep quiet unless they had a question.  Video had to stop immediately if I requested it.  The SPCA staff was outstanding.  They all cheered me on (very, very quietly) and helped me in any way they could.  The amputations were fairly simple.  There was just enough tissue there for me to close each wound completely.  The second ear went faster than the first, as I had learned a great deal by that time.

When I was finished, I stayed with a hand on her little back as she woke up.  I was thinking over all that had happened and needed to happen, when I saw movement out of the corner of my eye.   Her tail was wagging.  I reached quickly to remove the tube in her throat that had helped her breathe and delivered the anesthetic.  Her eyes were trying to focus on me as her tail thumped the table.  She licked my hand, and the tears I didn't know I'd been storing up filled my eyes.  I kissed the center of her forehead and tickled her chin.

"Nice job, girlie," I whispered to her.   As I looked at her adorable little face straight on, it dawned on me: Her ears are crooked.  A little jolt of panic shot through my chest.  I had been so worried about getting those ears off her head and being able to close the wounds that I hadn't thought to see if I gave her a matching set of new ears!  I felt terrible.  What a lousy plastic surgeon I turned out to be!  Well, I wasn't going to put her through anything else that night.  I wrapped her head in a bandage, administered more pain medication, and left - 2.5 hours after I had arrived. 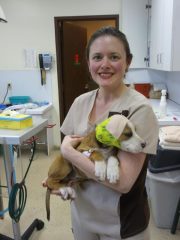 Nikki was amazing!  She healed beautifully.  She held the entire staff (and anyone else who met her, news reporters included) in the palm of her paw.  She would cry pitifully, which always induced someone (or several someones) to rush to her cage.  As soon as attention was administered, she thumped her tail and played with her toys.  She stole hearts at every turn.

As the months went by, I became "the vet who fixed Nikki's ears".  I talked about her at fundraising events, on TV, and on the radio.  But nothing was as rewarding as rubbing her little ear buds and getting a kiss in return.  At the time of her spay, I thought about fixing her ears, but I just couldn't bring myself to cause her any more discomfort.  Besides, she wore her badges of honor well, despite their asymmetry.  And her new mom and dad thought she was beautiful no matter what her ears looked like.  The fact that they were healed and painless was enough.

I still see Nikki on a regular basis.  I follow her on Facebook (along with LOTS of other people), talk to her mom whenever I can, and smile as I watch her grow into a sassy adult.  This one little soul has made my life so much better.  Repairing her ears made me feel more accomplished than anything else I have done in my career.   I hope through her story that people become more aware of animal cruelty, and demand that it be stopped in their community.  When I think about the fate Nikki had in store for her: a fighting dog with no ears for an opponent to grab onto - it makes me so sad.  Because there are THOUSANDS of Nikkis out there who won't get the chance that she did.  They will fight for their lives, and eventually, they will die.  No one will kiss them as they go.  Their mangled ears and scarred bodies won't feel a gentle touch from a beloved owner.  They will die in the ring or be killed and thrown in a dumpster, because if they can't perform, they are worthless. 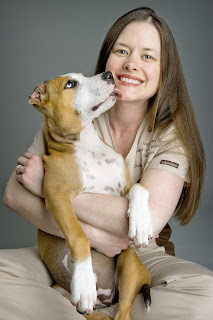 Congratulations to SPCA Tampa Bay for saving this life, and helping this wonderful girl find a forever family.  On October 15, I will be at the SPCA Tampa Bay 3K Petwalk at the Lap of Love Veterinary Hospice booth.  Come by and say hi.  Or, join my team and help me raise money to help more pets like Nikki get a second chance  http://3kpetwalk.kintera.org/faf/search/searchTeamPart.asp?ievent=477838&team=4254181.  SPCA does such a wonderful job and saves so many animals.  Their medical department is full of animals being rehabilitated from injuries, behavior problems, and abuse.  Their volunteers work tirelessly to socialize, exercise, and give attention to the animals already up for adoption.  If you can help them out, even a little, you could help a little fur person like Nikki get a new home and a new life.