Feline asthma, also known as feline bronchial disease, allergic bronchitis, allergic airway disease, or allergic asthma, is thought to be the result of an allergic reaction that causes spasms in the bronchi and prompts airway inflammation and swelling. This causes restricted airflow with subsequent respiratory distress. It is characterized by recurrent episodes of bronchoconstriction, cough, and possibly difficulty breathing. 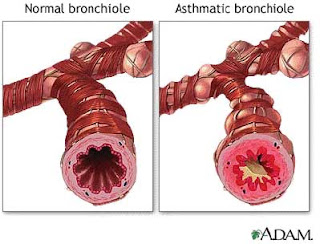 Affected cats are generally diagnosed between two and eight years of age, though can be at any age. Females are twice as likely to be diagnosed as males, and Siamese and Himalayan breeds seem to be far more commonly affected.

The most common symptom is coughing, which can sometimes be mistaken for gagging, hairballs, etc. by owners when it first starts. Other symptoms include labored breathing, increased respiratory rate, lethargy, and wheezing. Cats may suddenly require emergency treatment, even during their first noticed episode.

Diagnosis is confirmed with radiographs (x-rays) looking for lesions in the lungs consistent with inflammation of the airways. Other diagnostics that may be helpful include a complete blood count (CBC), internal organ function tests (chemistry), heartworm antibody testing, and fecal testing (to rule out parasites that can live in the lungs).

Cats that have been diagnosed with asthma need to live in an environment that helps to minimize triggers of episodes. This includes using dust-free litters such as newspaper, wheat or corn based litters (or consider toilet-training to be a good option to eliminate the need for litter entirely). Activities that produce smoke, such as cigarettes or wood-burning fireplaces, should be avoided. Stressful situations should be avoided if at all possible, including strenuous exercise. Obese cats would benefit from weight reduction. There is also some evidence that food allergies can be a trigger, as well as pollen, mold and mildew.

Medical treatment is limited to a few classes of drugs. The first are bronchodilators (drugs that increase the airways); these include terbutaline, theophylline, and albuterol orally or through inhalation. The second class is steroids, which can be given orally at home or via injection during an emergency. There are also steroid inhalers. Therapy is generally started with oral medications and eventually upgraded to inhalers if pets has breakthrough incidents with oral medications or begins to have chronic side effects from oral medications. 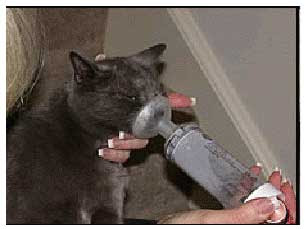 Prognosis can be good for long periods of time with medical therapy, however asthma does tend to be a progressive syndrome that is rarely cured. Episodes of acute bronchoconstriction can occur and may be life-threatening if not treated immediately. 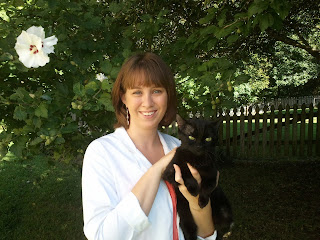