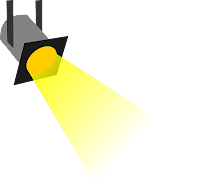 Dr. Dana was born and raised in Freeport, NY- a beautiful town on the water of Long Island.  "Before my sophomore year in high school, I moved to Stony Brook, NY, another picturesque village on Long Island.  I met my husband in the Ward Melville Players drama club.  I moved to North Carolina for undergraduate studies." Dr. Dana says.


She has two boys, ages 11 and 9 and the younger son is from Ethiopia.


Dr. Dana has a few furry kids as well. "Lydia, our hound cross found in the mountains of NC with her siblings in an ice storm; Roger and Bruce, our bottle raised Domesticated Short Hair (DSH) cats from two different litters one summer; Ginny, our most recent addition DSH also bottle fed with her brothers who have been adopted out; Sirius, our charcoal cornsnake (pet of 11 year old son) and Harry and Ron, our guinea pigs (pets of our 9 year old son)."  (WHEW - that is a full household!)

Dr. Dana is a self declared geek and went to Guilford College, Greensboro, NC  (c/o 1987) and majored in Biology with a concentration in associated sciences and a minor in German.   She graduated from North Carolina State University College of Veterinary Medicine in 1997. Where she was a member of the feline club, bovine club (yes - she is a small animal vet with a hankerin’ for cows), and WAAZM (wildlife, avian, aquatic and zoo med).


Fun facts: Dr. Dana took French in junior and senior high, German in senior high and college, American Sign Language in college, and she has taught herself some basic Amharic, (spoken in Ethiopia). (she called herself a geek first)

If she could own any exotic animal it would be a manatee or dolphin (she needs to come visit us in South Florida clearly).  And she thinks a Pteranodon would make a very cool patient. (I had to look up what a Pteranodon was!)


If she could come back as an animal what would it be?  Any cat, domestic or wild.

I asked her what her favorite part about being a vet is ....  "They told me before my vet school interviews not to say, 'I want to go to vet school because I love animals', but hey, I love playful cats and smoochie dogs."   (Ditto) 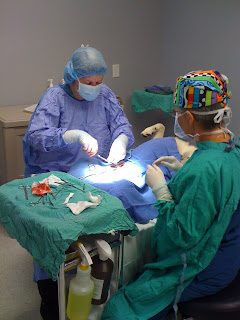 Dr. Dana used to be a Montessori school teacher between undergrad and vet school and would like to do that if she was not a vet.

The person she admired most is Ignaz Semmelweis. In the mid-1800’s in Hungary he introduced handwashing standards after discovering that the occurrence of childbed fever could be prevented by practicing hand disinfection in obstetrical clinics.  For this successful yet such simple and cost effective method, he is rightfully considered to be the savior of mothers.  And you all thought Louis Pasteur was the bomb.

When asked what her hobbies were... her list was... "Camping and boating at Jordan Lake, reading, snow skiing very slowly, scuba diving which I have not done in 11 years (sigh), traveling, cooking and eating, gardening, talking about animals, talking about my kids, and I used to oil paint landscapes and florals."

28 Do you not know?
Have you not heard?
The LORD is the everlasting God,
the Creator of the ends of the earth.
He will not grow tired or weary,
and his understanding no one can fathom.
29 He gives strength to the weary
and increases the power of the weak.
30 Even youths grow tired and weary,
and young men stumble and fall;
31 but those who hope in the LORD
will renew their strength.
They will soar on wings like eagles;
they will run and not grow weary,
they will walk and not be faint. 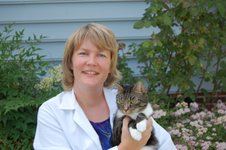 And that is a little something about Dr. Dana Lewis! :)
Dr. Dana assists families with Pet Hospice and Euthanasia in the Raleigh North Carolina area (Raleigh, Durham, Chapel Hill and the greater Triangle, as well as Wake, Durham, Orange, and Chatham counties.)
Click here for Dr. Dana's bio link
DrDana@LapofLove.com
www.lapoflove.com