Amputation In Cats and Dogs - Lap Of Love

AMPUTATION
Amputation...It's a word that fills most of us with a sense of horror.  We immediately think of ourselves missing an arm, a hand, a leg, or an eye.  We've watched the drama on television when someone wakes up minus a body part and starts screaming.   We think of people learning to walk again and are saddened by their ordeal.

I'm a little different.  When I hear the word "amputation" I smile.  I remember Trois Jambes (also called Jambie or Mr.  Moo), the tiny kitten whose life was saved by an amputation and who hopped his way into my family's hearts. 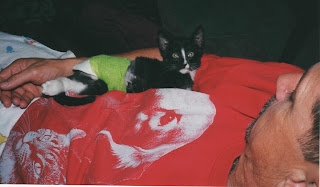 Not long after I graduated from veterinary school, a Good Samaritan brought in a tiny black and white kitten who had been hit by a car.  They gave the receptionist $20 and asked if we could put him to sleep.  My boss, a gruff but kind man, told me he wouldn't mind at all if I worked to save the kitten.  It would be good practice.  The little guy's rear leg was shattered and infected.  He was in shock.  We decided to amputate.  It was my first amputation surgery, and I was scared to death that he would die (that was actually highly likely considering the condition he was in). 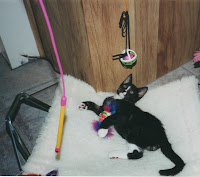 He survived the surgery, and I took him home to watch him overnight.  My parents caught sight of him and fell instantly in love.  He lived with us until he passed away at the age of 3 from bladder issues brought on by the accident.

Mr. Moo was an acrobat.  He would do "floor exercises" running at top speed to each corner of our large area rug.  During the Olympics, we would laugh and say he was a gymnast.  The only time you could tell he had a missing leg was when he walked.  He looked so pitiful hopping along.  And then he'd take off running and scale a piece of furniture like he had six legs instead of three.  Jambie taught me that missing a leg didn't make him feel awkward or embarrassed.  He could still turn into an octopus if we tried to give him a pill.  He didn't mourn over his loss.  He lived his life just as he pleased with almost no limitations. 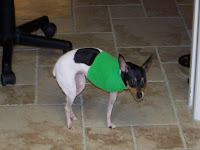 Years later, I found myself doing shelter work, and often the difference between life or death for a pet was an amputation.  We couldn't always afford to send injured animals to a specialist for surgery.  And some were injured so badly that the only option was an amputation.  I was always amazed at how quickly they would recover.  Most had not been using the injured leg anyway, so they only had to realize there was no more pain.   I had trouble getting them to comply with cage rest - they wanted to run and play as soon as they felt better (which was usually within a day or two).   I saw many cats with severely injured eyes who were purring and rubbing their cheeks on my hands hours after surgery. 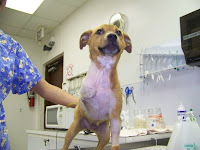 Amputation is an excellent treatment option for many diseases.  It isn't anything to be afraid of.  Your pet only wants to be free of pain and spend more time with you.  If your vet recommends amputation, please give it full consideration.  It may take a little getting used to for both of you - but if it gives you and your pet more quality time together then it's worth it! 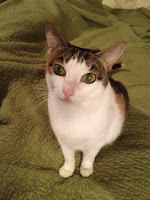 Dr. Mary Gardner's 2 cents:  Two years ago I found a cat in the islands while I was on vacation.  Her name is Mingo (we found her by a FlaMINGO pond). She was missing a back foot - we don't know how or why but you can tell it was present at birth and somehow was lost. Locals told us that many birds of prey will pick up kittens and maybe her foot came off in the clutches of a bird. Who knows. 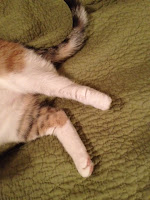 But I will tell you that Mingo could care less about having a peg leg.  I tried my best to take a full body shot of her so you can see it - but she is too wiggly!   She runs faster than all my other cats and even jumps up on all the counters!  She does try to scratch her ear with the foot and all she does is scratch the air. It's so funny.  The point is I have had many clients that have had a cat/dog that needed even a toe or a foot amputated and they were resistant about it.  Pets really have an amazing feature of simply not caring about amputation!
Dr. Mary Gardner

Please explore our website www.lapoflove.com or contact your local Lap of Love veterinarian to ask any questions you may have about hospice and euthanasia.