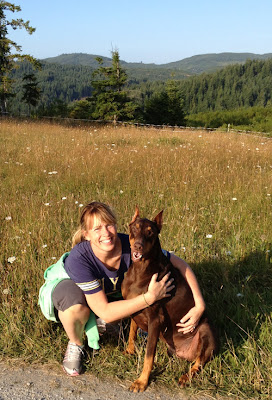 October is Adopt-A-Shelter-Dog Month and we wanted to share with you the story of our very own shelter dog, Duncan.

We adopted Duncan 2 months after the loss of our doberman Neo.  Duncan was at a rescue site 8 hours north of us. He was 6 years old and the family just could not care for him anymore and they dropped him off at the Doberman rescue on Christmas eve.  We confirmed he was not dog or cat aggressive since we have other pets. 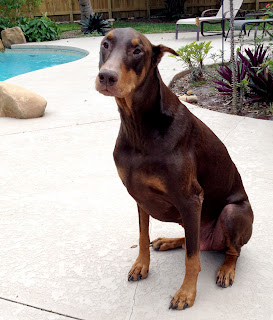 Everyone thought we were crazy adopting an adult doberman with no true history but he looked so similar to our Neo and I love the breed. And even if I only have 3 years with Duncan, we could still give him a great 3 years.

January 8th 2011, we met the rescue coordinator halfway and out came Duncan lumbering off the back of this pick up truck. He was HUGE -- so much bigger than Neo -- especially since Neo suffered from cancer and got skinnier towards the end. I instantly bear-hugged this beautiful giant (who was named Duke at
the time). In retrospect, it was stupid of me to do that to a strange (and huge!) dog but I just fell in love instantly.  He has been a wonderful addition to our home and I think was heavenly-guided to our family from Neo.

Duncan is a goofball. He loves to chase bees and grasshoppers, is friendly with everyone but also a very good house protector, and he LOVES all the cats!  He is a great example for the adopting cause. He is a full-blooded, purebred Doberman and was an adult dog when adopted him; people should not worry about adopting an older pet!


Below is a picture of Neo and his sister Serissa. She loved her brother and has adjusted to her new goof-ball sibling well. 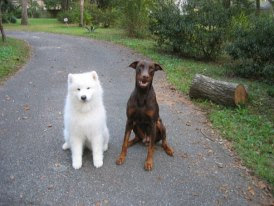 ~ Mary Gardner, DVM
www.lapoflove.com
Posted by Unknown at 5:00 AM