Too numerous to count, by Dr. Cheryl Maguire

October is Adopt a Shelter Dog Month and just so happens to be the month that I am revisiting my shelter roots. Just over 27 years ago, I began my life working with animals as a kennel attendant at a shelter in Southern California. I was very young but full of energy and optimism. I eagerly bottle-fed kittens and puppies, hand-fed orphaned baby birds, cleaned kennels and weeded the exercise yards all because I loved animals and felt that the work was so important.

Because that particular shelter I started out in was what would now be labeled a “boutique” shelter I was protected from the harsher realities of the large municipal shelters. Still, I was initiated into the world of neglect, pet-overpopulation, disposable pets, the pit bull controversy just to name a few of the problems plaguing shelters then and now. I moved on in life and with my career eventually becoming a veterinarian. Along the way I continued to volunteer or work at shelters wherever I lived.

It has been two years since I left the world of shelter medicine after burning out from a full- time job at a high profile shelter that left me mentally and emotionally spent. Fast-forward to this month when I find myself once again on the front lines of shelter medicine. I’m no tender- hearted rookie, I am a realistic veteran, but what I have seen in the past few weeks has been nothing short of discouraging. 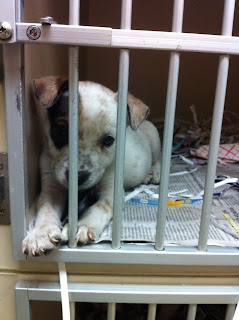 Twenty-seven years ago mandatory sterilization of shelter animals was not wide-spread the way it is today. Prepubertal neuter and spay was not practiced and was even considered detrimental. There were no trap-neuter-release programs for feral cats. There were very few rescue groups and those that were active did not have such luxuries as cell phones, the internet and social media to facilitate communication to help pets in need. We now have all of these programs and amenities at our disposal today and what is the result? Tragically, not much has changed as far as the unfortunate animals are concerned.

The shelter that I have spent the past two weeks at is overflowing with dogs and cats. Nice dogs and cats. Oh, and not just Labrador retriever and German Shepherds cross breeds. There are plenty of purebred dogs there. Just in one week I saw the following breeds come across the door: Anatolian Shepherd, Bull Terrier, Pembroke Welsh Corgi, Bichon Frise, Cocker Spaniel one each of these breeds and too numerous to count of the following: Boxers, Poodles, Chihuahuas, German Shepherds, Schnauzers, Dachshunds, Beagles, Labrador Retrievers, Siberian Huskies, Malamutes and of course Pitbulls….not just mixes of these breeds but purebred examples of each breed mentioned. All in one week!

I am depressed and discouraged because I had hoped that something had changed. That perhaps all of the young puppies and feral cats that I had spayed over the years had made a difference. Sadly, they have not. Please adopt a shelter dog. Do not buy a dog. I am tired of watching nice dogs and cats die senselessly. This madness has got to end.